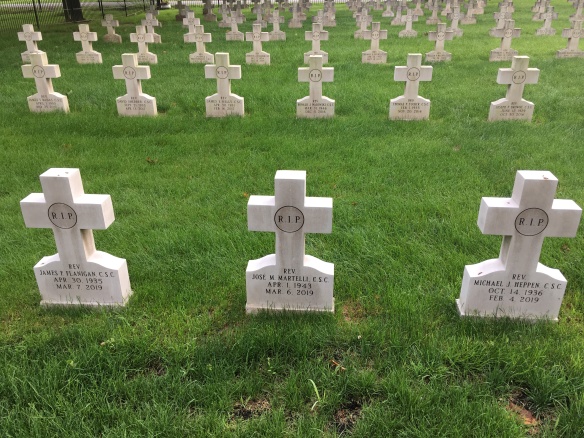 Brother Clarence dug the graves of our priests and brothers for decades. He never admitted to such a task during lunch at the seminary.

We were kids whom only carried books and avoided shovels. He served with love.

I never found out who dug his grave. I do know it was filled up with a holy man.

Brother Marcellus quietly clipped grass from around the concrete crosses. He must have prayed in rows.

His one shoe squeaked when he walked the long hallways in the seminary.

The rhythmic and often annoying sound was actually a reminder to us seminarians that he had been walking among the dead. I was always grateful.

Brother John served as administrative assistant to the provincial for 50 years.

I can imagine some people want to dig up his casket because the secrets he carried to his grave must be somewhere.

I remember hearing stories about how the elite of Holy Cross, the provincials and leaders, were buried in separate rows in the early days of the cemetery.

I am not sure of the exact date when all of that changed.

I am grateful that death treats us all the same.

I also remember hearing how some of the caskets of those leaders at the head of the line slid into the lake in the early days because of the weak soil.

We tried to hide our seminarian smirks.

We never laughed when we walked in the areas of the cemetery that put our brothers on one section and our priests on the other.

We got rid of at least one boundary in the Church.

Charlie was a character. He was the priest who invited Fr. Henry Nouwen to Notre Dame in the 1960’s to teach.

He admitted to me that because Henry wrote lots of books, everyone new Henry.

Charlie said to me one day, “Ronnie, but nobody knows me!”

I can’t help but laugh at Charlie’s grave.

He would want everyone to do that.

Jerry retired as the CFO at Notre Dame. He lived in the seminary at the same time as Charlie.

Fr. Jerry was the kindest man I have ever known.

He not only dealt with financial bottom lines, he also consoled hurting priests across the country.

If a priest were in trouble, Jerry would disappear for a couple of days. He would hurry to the airport and fly to his side and comfort him in his vocation.

Jerry never spoke of such a thing as he ate only milky grits for breakfast in the seminary.

However, we all knew.

Father Peter was another live wire. He spoke English with both German and Spanish accents.

He bantered endlessly with us novices. His skin was tough from wars and conflicts, in Germany and Chile.

In the end he would laugh at our shenanigans.

His brilliant laugh echoed off the marble at Marigreen Pines.

Father James served as rector of the seminary when I was in college. He taught sociology at Notre Dame.

He had a way of reading our needs.

When I served people in poverty in Portland, Jim heard confessions on Mondays. He also served coffee in our hospitality center.

He soon developed memory loss. That was a death by inches that I still grieve.

A couple of years ago, there were four men named “Ron” in the community. Three of them are now deceased.

One Ron died after doing his laundry.

Another Ron died from years of drinking and living sober.

The third Ron died of giving his life to the sick.

His funeral gathered one of the largest crowds of South Bend parishioners ever at the Basilica of the Sacred Heart.