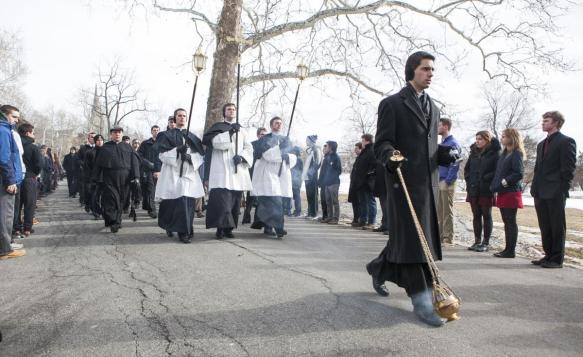 Especially in November, the cemetery reveals the paradox of how our men lived and how they died.

Fr. Jack showed me in spiritual direction that paradox is real when he told me his story of recovery from alcohol.

As I hold my chalice on many days at Mass, I remember him because he was allergic to the Real Presence of Christ Jesus.

In graduate school I threw clay on a wheel one semester. I gave him my favorite bowl for Christmas. The bowl had one flaw, a chip on the rim.

I hesitantly offered it to him, telling him of the flaw as my eyes fell to the floor.

With the gentlest of smiles, he looked me in the eyes and said, “A Navaho rug is not a Navaho rug unless it has one flaw.” Now there is room for God to work.

I still hold his words in a chipped heart.

He died at high noon on Easter Day.

An academic dean once told me that Fr. Chet, who taught English at Notre Dame, was considered to be an up-and-coming poet in his younger days. I asked Fr. Chet why he gave up writing poetry.

He looked down to the ground and responded to me with a grunt, “I gave it up years ago, and that is all in the past.”

I always wondered what secret he held; about what flaw was his truth.

One time, I read poetry to him at his grave.

Fr. Jim was considered one of the most brilliant writers in Holy Cross. He died after slowly losing his sharp and intelligent mind.

I always wondered if we could find the reason for his decline written on an index card or a scrap of paper tucked away in one of his filing cabinets.

Fr. Bill was considered one of the most influential preachers at Notre Dame in a generation. He died five days after collapsing from encephalitis. He was 50.

His nickname was, “The Silver Fox,” because of his thick, silver hair, and his keen insights. The doctors had to shave half of his head for a surgical procedure to relieve the swelling on his brain. They tried to hide that half of his head in the casket.

Some paradoxes show more than others.

Fr. Tom traveled to Notre Dame from the University of Portland for his first meeting as a Norte Dame Trustee. On his way home, he was killed when an iron poll slid off a truck and slammed through his windshield.

Jesus was barely mentioned during his funeral homily. I never needed the tenderness of Jesus more.

We all felt the same.

There is one grave that is empty in the cemetery. It is not just an answer to a trivia game.

Fr. Phil was in the process of joining a diocese, so he was buried in another state. His family and his Holy Cross family wanted a visual reminder that he still belonged among his brothers. He died of a long battle with alcohol.

Fr. Larry taught German at Notre Dame. His emphysema caused by smoking stopped his career after my freshman year.

I never had the courage to tell him… I flunked my second semester of German after transferring from his class.

Fr. Carl coughed so loudly that students could hear him across the campus. He learned the classical guitar in retirement. He played it beautifully, but with a cigarette hanging out of his mouth.

I can still hear the strings echoing his passion.

Fr. Briedenstein never learned to speak after a stroke only because he was too stubborn and proud. He had been a high-ranking military leader. He was used to barking orders at people. He fed on anger. He medicated with bourbon.

He died only able to speak one complete word. “Too, Too,” was his command to me and to others who cared for him. His red-faced commands echoed down the hallway of the retirement center with various inflections.

I tried to help him mouth the words, “thank you.”

I listen again to the echoes of paradox across the generations of these men who served beyond measure.